How to Make Parents Behave

As a youth hockey coach, you have a lot on your plate just trying to get the kids on your team to behave and do the things they’re supposed to do on the ice. Unfortunately, however, that’s not your only responsibility. These days, you also have to keep the parents in line.

It’s sad but true. It is not at all uncommon in this day and age to hear parents booing bad shots made by kids who are just doing their best, shouting at referees they don’t agree with, or even getting into verbal or physical battles with parents from the opposing team.

At the very beginning of the season, make it clear that you demand respect from all parents and players at all times and to all people. Clearly outline the penalties for bad behavior at games. Many coaches, for example, will penalize poor mannered parents by having their child sit out for a game, or, if the problem is really bad, removing them from the team. It’s unfortunate that children have to be punished for their parents’ actions, but, in many cases, the fear of having their child sit out or be kicked off the team is usually a pretty effective deterrent to bad behavior. 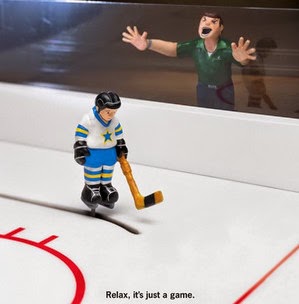 Even with these ground rules clearly laid and in effect, there are still going to be times when emotions run high. Maybe it’s a tense game or a game against your team’s biggest rivals; whatever the case, if you notice one or more parents getting out of hand, have a strategy in place for how to control the situation. Many coaches, for example, will have an assistant coach take rowdy parents aside to calm them down and remind them of the rules. Don’t hesitate to do something like this either. It’s better to catch and calm tempers early than it is to ignore a brewing problem until it boils over.

Remind Parents That They are Role Models

Finally, remind parents that they are, for better or for worse, role models for their children. Regular reminders that kids learn from and often imitate what they see will help parents to realize the impact their behavior can have and will make them more likely to keep their attitudes and their actions in check.

Posted by Big Bear Tournaments at 12:30 AM
Email ThisBlogThis!Share to TwitterShare to FacebookShare to Pinterest
Labels: relax its just a game, role models in youth sports