Have you heard of cross ice hockey before? Just in case you haven’t, it’s a sort of game that focuses on training and on skill development, and many coaches feel it’s a lot more effective at teaching the fundamentals of the sport than standard ice hockey.

During a 50 minute standard game, most players are only on the ice for around 15 minutes total, which isn’t a lot of time to practice important, in-game skills like puck control and shooting.

Cross ice games were designed to give kids more real on-the-ice, in-game experience. Thus, it is a smaller game, taking place in a smaller space, and with a smaller number of players. However, there’s nothing “small” about the skills learned. Players don’t stop playing at any point during the brief game, so they get to skate more, stickhandle more, and shoot more. They are also forced to think quickly and make tough judgment calls in just a few seconds. 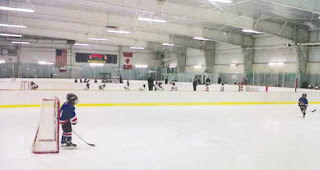 Proponents of cross hockey believe that not only does this game build skills, but it also builds speed, which makes sense since the whole thing happens so fat!

Unfortunately, however, not a lot of coaches use this method as part of their training and skill development plan. Instead, they tend to be stuck in their ways of full flow drills, which have shown time and time again to be less effective than small space drills and ice cross play.

Hopefully, that should start changing soon since USA Hockey recently came out and admitted that cross ice hockey is much more beneficial for young players than standard games and that those who engage in it enjoy all of the following advantages:

With so many benefits, why wouldn’t you want your child to engage, at least some of the time, in cross ice hockey? If your coach isn’t already utilizing cross methods, talk to him about the advantages. If he’s still stuck in his ways, you might be better off finding a league that’s more dedicated to changing with the times and trying new things in the interest of helping young players.