These days, children as young as five or six often have cell phones and know how to use computers and tablets with ease, often more deftly than even their parents, teachers, and coaches.

And, while there are many advantages to children having cell phones, such as being able to reach their parents, anytime, anywhere (and vice versa), it often leads to ugliness in the world of sports. Parents and kids can use their phones and other devices to post a mean comment about a teammate or someone from an opposing team. They can take hurtful videos or pictures and spread them across the world in seconds, and they can also be major distractions, taking kids away from their real lives and into a sort of “virtual life” that is really no life at all. 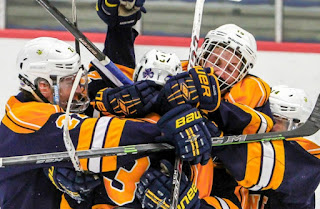 If you coach youth hockey or are often a spectator at youth hockey events, you’ve undoubtedly seen children stopping in the middle of practice to check their phones or rushing to their beloved phones the minute a game is over.

If you’ve seen, firsthand, the modern obsession with technology, you know how damaging it can be. That’s why coaches and parents are encouraged to institute a “no technology” policy for all things hockey-related.

For example, you may want to consider requiring young players to leave their phones at home or at least stashed away at all games and practices, whether they’re on the bench or on the field. This might lead to some initial protests, but if they want to play bad enough, they’ll obey.

It’s also wise to institute a strict “no cyber-bullying” policy that includes and enforces strict consequences, even up to dismissal from the team, for ugly comments or messages posted on social media or disseminated through text or email by players or their parents. And, yes, sadly, sometimes the parents are the ones to blame. Think of this policy as a way of teaching good sportsmanship both on and off the field.

And, since technology isn’t showing any signs of going away anytime soon, consider finding a way to embrace the positive side of technology. Maybe you could have a Facebook group where you highlight and celebrate one player each week, or maybe you could create an “encouragement board” where parents and friends can post positive, uplifting messages to players before a game. Doing something good with technology will reduce the temptation to do something bad with it.

Technology can’t be ignored, even when it comes to hockey, or perhaps especially. Have strict rules and policies in place to prevent problems that often arise with technology and that can permanently and negatively impact team spirit and morale.
Posted by Big Bear Tournaments at 12:30 AM
Email ThisBlogThis!Share to TwitterShare to FacebookShare to Pinterest
Labels: youth hockey events