The Trouble With Coaches

Youth hockey coaches come from all kinds of backgrounds and have all different levels of experience with the sport. In general, though, most hockey coaches were, at one point in their lives, hockey players, who were coached themselves. 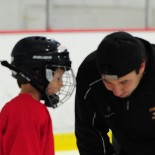 And, because most coaches were coached players at one time, it’s only natural that many coaches coach in much the same way they were coached as youngsters. Unfortunately, though, this isn’t always a good thing.

A lot of coaches were skilled players as kids and, if they were lucky, later on went on to play minor and/or college level hockey, and, if they were really lucky, minor pro hockey or beyond. As such, a lot of these players don’t know what it’s like to be just an “average Joe” player or to do much more than mimic what they were taught.

Players of yesteryear were drilled and hounded but also mentored, and it’s good for today’s coaches to mimic those skills. However, coaching has become a true art form and lots of advancements have been made within the coaching field, which is why it’s smart for coaches these days to receive training for actual coaching and not simply coach based only on what they learned as players.

Coaches who receive actual training in coaching know how to do real, modern coaching. Through training, they can learn how to create effective drills, communicate with parents and players, serve as great managers, take care of technical issues, and more.

Even if a coach is just a volunteer, doing coaching on the side for fun, training can be rewarding and extremely helpful for everyone involved. The bottom line is that coaches today need to be trained as teachers, team managers, and more, not just hired or recruited based on their playing experience alone; being a great hockey player at one point or another doesn’t necessarily make someone a great coach.