There’s a problem in girls’ hockey these days, and it has to do with how they handle their sticks! While boys are guilty too, this happens more frequently with girls- this holding of their sticks in such a way that they can’t shoot or pass properly. 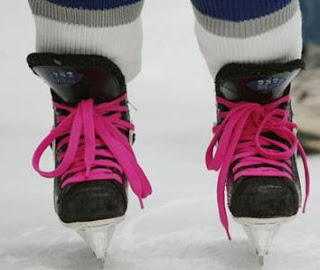 What we’re talking about is a mishandling position that’s so common it has its own name: the “chicken wing.” A player is using a “chicken wing” hold if she has her top hand tucked near her hip, thus pushing out her elbow into an uncomfortable and ineffective “chicken wing.”

When a player is holding the stick in this way, she’s going to be choppy and inaccurate in all her movements, and she won’t be able to move the stick out or around as widely as necessary. The chicken wing players will lack follow through and tend to slap passes, and it’s not because they’re bad players- it’s because they’re bad stickholders!

To fix it, encourage players to move their top hand away from their body, holding the stick downward and away. They’ll be able to move their stick much more easily, roll their wrist as needed, and they’ll be more comfortable and precise during game play.

While this new position may take some getting used to, it’s the proper one, and your players will immediately see how much better it feels and how much better they’re able to play as a result. Start working on it now, and before you know it, you should see a big difference. Your players will thank you...and they won’t look like chickens!
Posted by Big Bear Tournaments at 12:30 AM
Email ThisBlogThis!Share to TwitterShare to FacebookShare to Pinterest
Labels: girls hockey