Player in a Slump

Do you have a player or players who are going through a “slump?” Maybe they’re just not playing as well as they used to or their mind always seems to be somewhere else. Whatever the case may be, if you’ve got players in this state of mind, you’re not going to have a successful hockey season! 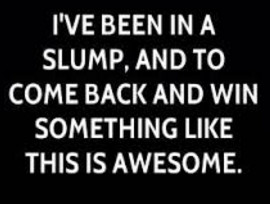 Fortunately, though, there are things you can do to get your players through this tough time and end up helping your team in the process.

Let’s Get Physical
To begin with, don’t just assume that something is “off” with your player emotionally. When a player hits a rough spot, coaches typically think, “oh, he must be having a bad time at home” or something along those lines, and while emotional issues are sometimes the cause of a slump, sometimes the answer is much more simple and physical in nature. Check to make sure your player is feeling okay and that he hasn’t suffered any injuries. If not, then check out his stance during the game and the way he holds the stick. There’s a good chance he’s doing something wrong that’s throwing off his whole game. If so, this problem can be quickly and easily corrected.

Emotional Issues
If it turns out that your player’s problem is emotional in nature, don’t panic. It’s common for young players to let worries from home, bullying from other teammates, or too much pressure get to them. First, make sure you’re not the cause of your player’s stress! Sometimes, even the most well-meaning coaches can end up putting too much pressure on their young players. If your behavior is in check or you don’t think you’re the cause of the problem, don’t be afraid to talk to the child about what’s wrong, being sure to offer support and encouragement as you do so. You may want to suggest that the child talk to a school counselor or to his parents if need be. Whatever it takes, helping a child to get through tough emotional issues can strengthen the bond between the two of you and ultimately make him a better player and improve his quality of life.

Build Confidence
If it’s your whole team or at least several players that are suffering from the slump, it could be that team confidence in general is not high. If you hear your players insulting themselves a lot or see them getting really down and defeated after a loss, there’s a good chance your “slump” is due to bad morale and poor confidence. Fortunately, that’s an easy thing to fix. Talk with your players about the importance of positive self-talk and building themselves and each other up. Only allow positive things to be said at games and practices. From there, work on positive imagery and visualization with your young players and also make sure you reward every little victory. If you can do these things, your players will be confident, excited, and over their slumps in no time at all.

Remember, a slump, no matter what its cause, is a temporary thing, so don’t give up hope when one of your players goes through a rough spot. Help as much as possible, and eventually, it will pass.
Posted by Big Bear Tournaments at 12:30 AM
Email ThisBlogThis!Share to TwitterShare to FacebookShare to Pinterest
Labels: getting out of a slump, successful hockey season