The Art of Acceleration

People love to talk about (and be impressed by) hockey players who can speed across the ice. However, while speed might be impressive to some, it doesn’t really matter much in hockey. Players don’t just go at full speed all the time during games, and, in fact, going too fast can cause them to lose control and not play as well. Therefore, speed isn’t really something that coaches need to focus on or force with their players. Instead, they should focus on acceleration. 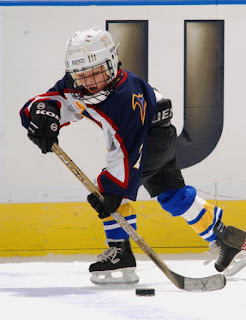 Acceleration is what players do when they take off and get moving. It does involve building speed, but it also involves maintaining control and being able to stop and start as needed. In other words, it’s not about just going as fast as you can; it’s about moving quickly but correctly, and it’s an important skill for hockey players to have.

Since acceleration is such an important skill to have- far more important than speed- it is something that coaches should work on with their players year-round, including and especially during the off-season when there is more time to focus on this skill.

Strength and power are essential to good acceleration, which is why a strength training regimen that involves squatting, dead-lifting, and other exercises that work the legs is essential. However, players should also work on their upper body strength, since a tight core and sculpted shoulders can make for smoother, easier movement.

Sprinting is also a good exercise that can help with acceleration since it will get players used to moving quickly and deftly for short periods of time. Sprinting drills in which players have to turn around quickly or go around obstacles can also be helpful since these drills mimic what might actually happen on the ice.

Players who work on acceleration regularly will see big payoffs in no time. Not only will they be quicker and more controlled on the ice, but, if their training regimen is a good one, they’ll also be stronger and more powerful

This can help them in all aspects of hockey and can also reduce their risk of strain and injury since their body will be used to regular workouts.

Thus, when players improve acceleration, they really improve all around, which is why it’s such an important skill to focus on.

Posted by Big Bear Tournaments at 12:30 AM
Email ThisBlogThis!Share to TwitterShare to FacebookShare to Pinterest
Labels: acceleration, hockey players who speed across the ice