Why Do Some Hockey Coaches Use Blue Pucks?

Does your child’s hockey coach insist on using blue pucks? Or maybe you’ve just seen these pucks in play before and wondered why they were blue. Well, believe it or not, there is a reason that some coaches insist on blue pucks for young players. 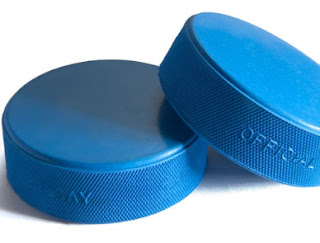 See, these blue pucks are not just different in color from standard black pucks. They are actually different in weight, weighing in at two ounces under the basic 6 ounce black puck. Coaches who utilize this puck thoroughly believe that using a smaller, lighter puck makes for easier, more effective, and more age appropriate play for young kids.

And, while many embrace the blue puck and feel like it just plain makes sense, others worry that it won’t provide the same strength training as a heavier puck.However, this isn’t necessarily true. People in favor of the blue puck argue that it will help kids to first develop proper shooting skills and stick handling skills, while also strengthening them at the appropriate pace and intensity level for their smaller size.

Supporters of the lightweight blue puck also feel that it will help goalies, allowing them to more easily keep their heads up, improve accuracy, and defend all areas of their territory. Plus, since the blue pucks have become commonplace, improvements have been seen in both goalies and regular players alike.

If your coach isn’t using a blue puck for your child’s team, he’s not following USA Hockey standards, and if he is or if he’s giving it a try, don’t knock it until you see the results. Many people, even those who were at first skeptical of the blue puck, have now come to support it.

Remember, at the end of the day, you want what’s best for your child and what is going to help him to develop skills at an appropriate and safe pace and level, and most agree that the blue puck helps kids to do just that!
Posted by Big Bear Tournaments at 12:30 AM
Email ThisBlogThis!Share to TwitterShare to FacebookShare to Pinterest
Labels: blue pucks, hockey coach, youth development