The Language of Hockey

Anyone who has ever been immersed in the world of youth hockey can tell you that it’s more than just a sport. It’s a way of life, a subculture. And, like so many other subcultures, the hockey world has its very own language. Players are often called by their last names or some play on their last names, for example, but that’s just the tip of the iceberg in terms of “hockey language.” There are all kinds of terms, phrases, and just good old slang that most youth hockey enthusiasts are familiar with.  Read on if you want to test your knowledge of hockey language, or if you’re a newcomer to the hockey world and want to ensure you know the lingo. 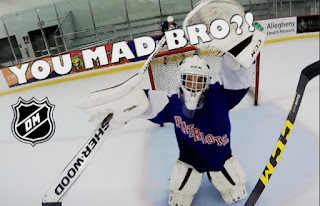 “Bagger:” A bagger is not a good thing, at least as far as young hockey players are concerned! This is when a coach chooses to punish the members of the team by having them perform a long, hard skate. However, a bagger isn’t always used as punishment. Sometimes, it’s just for warming up or conditioning. Either way, it’s usually dreaded; think of it as the hockey equivalent to “running a lap.”

“Bar Down:” This simple term is used to describe any shot that goes off the crossbar and right into the net.

“Boosties:” This one is simple enough! “Boosties” is just a slang term for the members of the Booster Club, which offers support to the team.

“Can Opener:” This is a term for a hockey move in which a player puts his stick between the legs of another player and then twists.

So, there you have it- the literal “ABCs” of hockey. Of course, these are just a few of many, many terms you’re likely to hear if you stick around the rink long enough. Don’t worry though; you’ll soon be speaking the “hockey language” along with everybody else!
Posted by Big Bear Tournaments at 12:30 AM
Email ThisBlogThis!Share to TwitterShare to FacebookShare to Pinterest
Labels: hockey language