If you’re like most people, when you think of hockey, you probably think of it as a “boys’ sport.” In truth, however, hockey is actually becoming more and more popular among young girls, and rightfully so! After all, it has just as many benefits for them as it does for the boys. 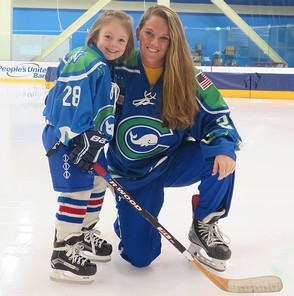 It shouldn’t really come as a surprise to anyone that more and more girls are participating in youth hockey. After all, more of everyone is participating in the sport. The sport used to, for example, only be popular in the north, but it has slowly merged to the south as well.

As hockey and its reach grows, it’s not surprising that it would appeal to more young girls. Data supports this trend too. Since 1990, the National Hockey League has reported seeing an increase in female participation of about 74,000 in Canada. Plus, female hockey clubs have grown by about 50,500 in the United States.

While not everyone may be happy about having to share the ice with females, they have every right to play hockey, and they benefit from it in big ways too. Many girls are drawn to the ice because of the chances for increased physical fitness, the ability to grow in confidence, the chance to improve leadership skills, and so much more.

Girls who are interested in entering into the world of hockey are encouraged to sign for a local hockey camp or to take lessons from a private coach. Through these methods, they can quickly discover what their skill level is and find a team that is suitable for them and where they are.


So, like it or not, it’s time for the boys to move over and make a little room on the ice for the ladies!
Posted by Big Bear Tournaments at 12:30 AM
Email ThisBlogThis!Share to TwitterShare to FacebookShare to Pinterest
Labels: girls hockey, girls hockey tournaments