Coaches are expected to teach their young players a great many things. Obviously, they want their players to excel at the sport, to develop skills, and to be good all-around athletes.

One of the most important things, however, that good coaches must teach their young athletes is how to exemplify good sportsmanship. 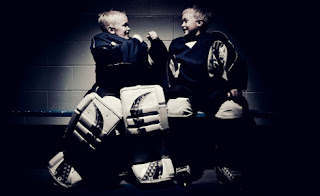 Fortunately, teaching this oft-neglected skill is simpler than you might imagine, especially if coaches can follow a few basic tips.

Often, when people think of good sportsmanship, they think of how athletes treat other athletes once the game is over, particularly when athletes are on the losing end.

And, while keeping a good attitude after a loss is an important part of sportsmanship, good sportsmanship also extends to what happens on the ice.

As a coach, you should teach your players to “play fair” no matter what. After all, you can’t be a good sport if you’re cheating or intentionally hurting other players in pursuit of a win.

By teaching players to abide by the rules and play fair all the time, coaches can instill true good sportsmanship in the young athletes they mentor.

Another thing that coaches have to be careful of is not allowing outside excuses for poor performance or a loss.

Instead of allowing players to blame bad ice, their teammates, or the other team, coaches should encourage players to look at what they could have done to improve their own playing.

By teaching players to continually improve themselves and to use every loss as an opportunity for self-betterment, rather than a chance to make excuses, good sportsmanship and an overall positive attitude is promoted.

These are just a few of many ways that youth hockey coaches can promote good sportsmanship. By following these tips and always leading by example, it’s entirely possible to instill good sportsmanship that will last a lifetime.

Posted by Big Bear Tournaments at 12:30 AM
Email ThisBlogThis!Share to TwitterShare to FacebookShare to Pinterest