Hockey and the Slapshot

Almost every person familiar with hockey is also familiar with the slap shot. This deadly shot is known for its ability to reach super high speeds. However, it’s not an easy shot to master and requires a lot of body involvement, stick bending, and skill. In order to help a young player potentially master this shot, there are a few important things to note about how the shot is performed. 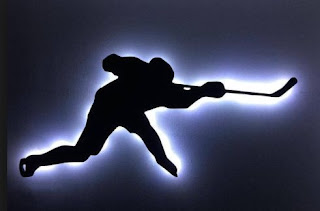 It Comes in Phases

First of all, a good slap shot isn’t just something that happens all at once. It can actually be divided into six quick but distinct phases.

To start with, there’s the backswing, which is how the player gears up for this powerful shot. He’ll typically place the stick up in the air and position it behind his body.

Then, as the player brings the stick toward the puck, he enters into the second phase of the slap shot, known as the downswing.

Once in motion, these six phases tend to happen all at once and meld together. With that said, however, it’s still important to be aware of each phase and its purpose in order to handle each phase correctly for a great slap shot.

Players should work on each phase individually and then work to combine them into one fluid shot for best results.

As you can see, mastering a slap shot isn’t all that simple. However, with some practice, effort, and a clear understanding of the various phases of the shot, it can be done!

Posted by Big Bear Tournaments at 12:30 AM
Email ThisBlogThis!Share to TwitterShare to FacebookShare to Pinterest
Labels: Hockey