People love to watch hockey, but for the most part, they don’t just love to watch. No, they also love to criticize the teams, the players, the refs, and the coaches. Surprisingly, negative and critical comments don’t just happen at professional hockey games. They are, unfortunately, uttered at youth hockey games too, and that’s where they can do the most damage to the parents and even the players who overhear them. It’s important to kindly remind spectators (and maybe even yourself from time to time) that actually playing hockey and simply watching and commenting on it are two totally different things. There’s a lot viewers don’t understand or “get” about what’s going on, no matter how much they think they know about the game and how it should be played. 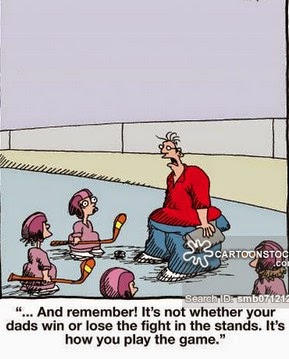 To begin with, hockey isn’t as simplistic as most other sports. While baseball, football, and the like have specific types of “plays” and “passages” that make them predictable and easy to play, hockey is an ever-changing game. No one can ever anticipate exactly what will happen at a given time, who will be subbed in, or really anything else about the game, so it’s wise to make spectators, especially those who are more familiar with how other sports are played, privy to this information.

Hockey is also a very “reactive” game, meaning that players have to quickly interpret what’s happening and then decide how to react immediately. They don’t take a timeout to strategize or huddle in a group to talk about what happens next; they just play, and that takes guts, especially for young players.

Parents and spectators need to be mindful of these facts and not take their frustrations out on the young players, the coaches, or the referees. The players are not able to have the same wide view as the spectators, so it’s important to understand that a play or move that looks obvious from way up top may not be so on the ice. Plus, things are actually happening a lot more quickly than they may appear to be from the stands.

Spectators need to remember the great skill and effort that is required to play hockey and should keep those facts in mind before they harshly judge youth players or anyone else closer to the action on the ice.