As the parent, coach, or friend of a young hockey player, you undoubtedly want the little athlete in your life to be a big success. For most people, being a “big success” means winning often. However, hockey isn’t just about winning, and neither is being a good player. A truly good athlete is more than just an athlete; he’s a hero- someone who gives his all to the game and who does so with dignity and pride.

So, how do you encourage young hockey players to be heroes? Well, to start with, teach them to treat absolutely everyone they encounter with respect. That includes referees, coaches, teammates, and even opponents; make that especially opponents. It’s all too easy to get caught up in the competitiveness of the game, but true hockey stars know that winning isn’t what it’s all about and that the people they meet along the way deserve to be treated kindly. 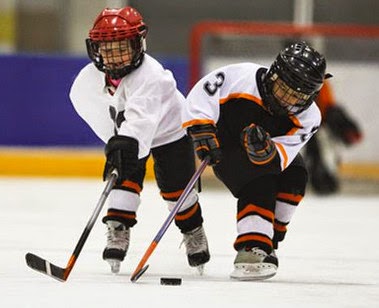 And, speaking of people met “along the way,” it’s also important to foster good relationships between your player and his teammates. There are going to be players who are stronger than him and players who are weaker, but they should all be counted as friends- people who your player works with to reach collaborative goals. Team outings that have nothing to do with hockey but that are instead focused on building friendships are a great way to develop and maintain strong team relationships.

You also want to teach your special young athlete to never give up. Even when a loss occurs or a particular skill seems impossible to master, teach your child that giving up isn’t the answer. Instead, pushing on and continuing to try is. Make a “no excuses” and “no complaints” rule and hold the player to it.

And, just as hockey heroes must learn to accept losses and the occasional failure with dignity, they must also learn to accept wins graciously. Teach the child in your life that it’s okay to be happy with a win, but it’s not okay to gloat or be rude to the other players.

These types of skills and attitudes- the very ones that turn a regular athlete into a hero- don’t just happen overnight. They are something the player must continually work toward, but the work will be worth the effort and will turn the player into not just a fine athlete, but a fine person.
Posted by Big Bear Tournaments at 12:30 AM
Email ThisBlogThis!Share to TwitterShare to FacebookShare to Pinterest
Labels: young hockey player