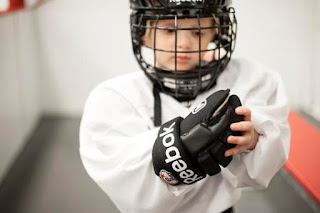 When it comes to hockey, most young players dream of being the stars of their team- the best of the best. The truth is, though, that being the “best of the best” often comes with a lot of unexpected pressures and struggles.

Sometimes, for example, if a child is particularly good at hockey, especially one particular aspect of it, such as playing goalie, his teammates and even his coach may come to rely on him too much. They might cheer him on and build him up when he wins...and then tear him down and snub him when he makes a mistake. That’s a lot of pressure for a young child- or anyone really- to deal with and process!

On the one hand, any child is going to enjoy being the “star” of the team and the attention and praise that it earns him. On the other hand, however, the pressure a “star” child feels, whether it’s real or imagined, is enough to cause him anxiety and stress that a child of his age shouldn’t be dealing with!

If you are lucky enough to have a very successful young athlete in your life, it’s important to check in with him on a regular basis about what pressures he may be dealing with. Ask gentle questions like, “What things do you worry about?” and “Who or what makes you worry about these things?”

You might get some answers that you don’t like. You might find out that a coach is pressuring your child...or even that you yourself are unintentionally doing so. If someone outside of the child is causing a lot of the pressure and stress, it’s important to talk to that person, and if you are that person, to change your behavior.

If the other players are the ones doing the pressuring, having a talk with your child’s coach, so that he can deal with the issue among the players is smart.

If it’s the child who is placing unrealistic expectations and pressures on himself, it’s your job to explain to your child that he can never be perfect or do everything perfectly and that that’s okay. Then, reinforce what you’re saying by shrugging off losses or small mistakes and emphasizing fun, not winning. Eventually, your child will let up on himself a little bit.

“Letting up” doesn’t have to mean being less of a player, but it does mean worrying less and experiencing the fun and love of the game that hockey, especially at this age, is all about.

Posted by Big Bear Tournaments at 12:30 AM
Email ThisBlogThis!Share to TwitterShare to FacebookShare to Pinterest
Labels: if a child is particularly good at hockey, young athletes