If you’ve been coaching for a while, then you probably already know that, no matter how much practicing you do, young players often seem a bit “shell shocked” when they get out on the ice in a real game situation for the first time. For new players, the speed of the game can be a bit startling and can throw them off a bit. 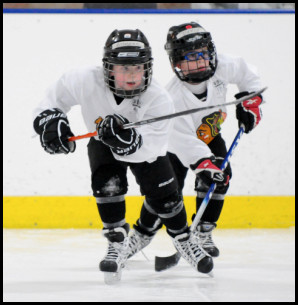 You can remedy this problem and help to fully prepare your young players for real ice action by choosing to run the vast majority of your hockey practices at game speed. Not only will this prepare then for real game action, but it will also force them to react instinctively and to get out of their heads and into the game fully.

Of course, you still need to focus on basic skills, such as skating and stick handling, but when you do even these things at game-speed, you’ll really help your players. If you don’t think your team is quite ready to run a full practice at game speed, try other speed-based activities, such as puck races, relay races, offensive cycling drills, and offensive and defensive breakout drills.

As your players gain in confidence and skill level- and they certainly will if you use these drills frequently enough- you can gradually up the speed of each practice until your little athletes are playing at game speed almost without realizing the change.

Using this method will make them fully prepared for that first game, and it will also make them more confident and less afraid, which can lead to a better experience, which, in turn, can increase the likelihood that your team members will stick with hockey for the long haul and develop a true passion for the game. It might also help your chances of winning that first game too, which will certainly start the season off on a high note!
Posted by Big Bear Tournaments at 12:30 AM
Email ThisBlogThis!Share to TwitterShare to FacebookShare to Pinterest
Labels: hockey practices