If you coach youth hockey, then it’s quite likely that a major source of confusion for you is how to correctly and effectively run power play lines. One tip that a lot of professionals advise is not making changes to the regular lines for power plays. Even though it can be tempting, the whole point of youth hockey is, of course, to learn, and learning involves losing and the occasional penalties. Thus, don’t cheat your players out of the real experience and what they’ll learn from it by changing up your regular lines and/or not giving everybody a chance during power plays. 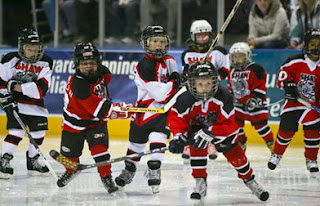 If you’re still not convinced that it’s right to let everybody play, keep in mind that hockey experts recommend NOT specializing youth teams and giving every player a chance to try everything. After all, the goal of youth hockey, though it can sometimes be easy to forget, is not to win but to educate.

When forming your power play lines, remember your ultimate goal- education- and try to include as many players as you can. Try and choose a good playmaker, a good goal scorer, and a good puck handler for each line for maximum effectiveness, and make sure you do some power play drills before actually trying the play out on the ice.

As a final word of wisdom, remind your players that they STILL have to work hard on power plays; often, they think everything will go smoothly and easily because of the team effort and that they don’t have to try as hard, but that’s not true. In fact, there are more things that can go wrong on a power play, so, in some cases, players may have to work even harder than usual.

If you can keep these tips in mind and pass them on to your players through your coaching, your power play lines should be highly effective.