Most people worry about young players getting injured on the ice. In truth, though, players can and often do get injured in hockey practice too. As such, it’s important for coaches to guard against practice injuries and to create a safe environment for their players. Coaches can’t control everything that happens in a real game, but they can get pretty close to controlling everything that happens during practice.

The first thing for coaches to remember is that a practice is just that, a practice. It’s not a real game, and though it should be treated seriously, there’s no reason for players to play as hard or as rough as they would during a game. Because practices happen daily for many young players, practicing too vigorously can drain energy and lead to muscle injuries and strain. And, allowing young players to get too rough during practices can lead to teammates hurting teammates, which is the last thing you want. Tell your players that it’s okay to “dial it down” a bit during practice. If you want, you can always step things up in the last one or two practices left before game day. 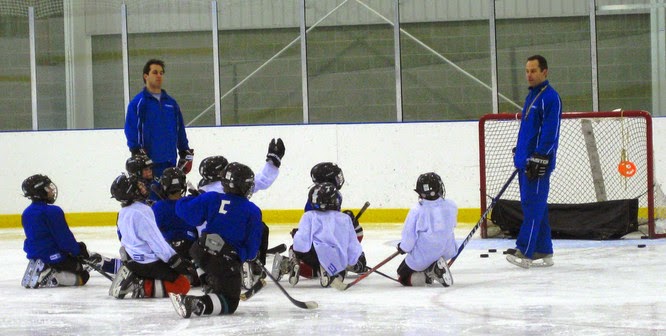 It’s also important, when running drills, for coaches to make sure that players are fairly evenly matched. When athletes are so young, there’s really no need to target their weaknesses by putting them up against much stronger players. Aim for pairs with complementary strengths and weaknesses but not for pairs where one player is much more skilled and/or aggressive than the other.

Coaches need to be aware of some of the more common injury-causing activities too. These include things like blocking and body checking. When players are practicing particularly risky maneuvers, coaches need to be even more watchful and attentive than usual. And, speaking of body checking, that’s not something that should be introduced too early on. Wait until players are physically strong enough to handle body checking before utilizing it in practice and, even then, use it sparingly.


Even when played correctly, hockey is a risky sport. Even the best coach may have some injuries occur on his or her watch, but those injuries are a lot less likely to occur if coaches follow these simple tips.

Posted by Big Bear Tournaments at 12:30 AM
Email ThisBlogThis!Share to TwitterShare to FacebookShare to Pinterest
Labels: hockey practice