Is There a "Cool Crowd" in Youth Hockey?

It’s crazy to think about adults feeling the need to be “in with the cool crowd.” After all, adults gave up that kind of thinking long ago, right? While that may be true for most adults, many hockey parents quickly find that youth hockey can get kind of clique-ish and that there tend to be some teams in town that are thought of as “elite.” 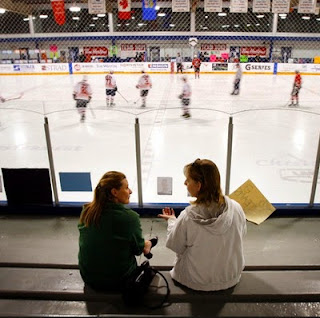 If you don’t believe that, just listen in on the conversations hockey parents have with each other. They ask questions like, “What team is YOUR child trying out for?” and then snub the responder when they don’t like the answer. There’s also a lot of competitiveness in general, with parents asking what other kids are doing to “get ahead” or to prepare for the upcoming season.

There’s no doubt about it. In most communities, there is a lot of pressure on hockey parents- which translates to pressure on kids- to get on the “right” team, but really, this is all pretty ridiculous. Youth players don’t need to worry about getting on the “big” or “elite” team. While that would certainly be a nice honor, what’s really important for youth players is finding a team where they can develop their skills, learn new ones, and just have fun...which is really what youth hockey is SUPPOSED to be all about.

Even for serious,older players who are hoping to land a scholarship or go pro, it’s important to remember that talent will always find its way in front of the right people. There’s no need to force it by putting a lot of priority on getting on a particular team.

Furthermore, not being on the “in” team can actually end up being a good thing for players. It can give them more time to learn skills at their own pace. Plus, players who may have been at the bottom of the barrel on their dream team will have a chance to shine, which will enhance their confidence and thus their performance.

Of course, sometimes there are young players who truly want that spot on the “dream team.” If they want it and for the right reasons, meaning not just because of a need to up their status or keep their parents in with the “cool crowd,” then that’s fine. If the reasons behind a player’s motivation are legitimate, then it’s fine to work toward getting on that “right” team, but it’s important to understand that success in the sport is not reliant on getting on a particular team.

A good player who works hard is a player who is going to shine anywhere. So, put away those middle school thoughts of “fitting in,” and just allow your player to do what’s right for him.

Posted by Big Bear Tournaments at 12:30 AM
Email ThisBlogThis!Share to TwitterShare to FacebookShare to Pinterest
Labels: hockey parents, Youth Hockey