We invited top prospects (and best friends) Logan Brown and Jakob Chychrun to sit down and interview one another. The only rule: No hockey clichés. This is their conversation.
Logan Brown
Alright, Chych. The NHL draft is tonight. We have been dreaming about this moment since … wow, when? Since we were five years old? Are you gonna be sweating, shaking, crying? What can I expect from you tomorrow so I know how to act?
Jakob Chychrun
Sweat-crying. No, seriously, I have no idea how I’ll react. It’s going to be amazing, especially having our families there. Do we have to set this up for the people at home?
Brown
We probably should. So, Chych and I have been best friends since we were little. Our dads played in the NHL. If you Google “Jeff Brown Quebec Nordiques” you’ll see a hilarious picture of my dad with a bowl cut, with a little party in the back. It’s brutal.
Chychrun
Hahaha. He’s gonna see this.
Brown
Listen man, he used to chirp me so much. When I was about 13, I went through a phase. I actually had a mullet for about a year. My dad was specifically giving me grief. Even now, he still chirps my hair, so I just think the people need to see this picture.
Chychrun
Players’ Tribune photo department, can you please track down this picture? 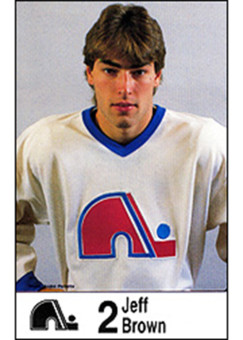 Brown
So my dad played in Quebec, St. Louis, Vancouver, Hartford — everywhere.
Chychrun
And my dad was an enforcer, mostly in Philly. A few other teams too, but he always considered himself a Broadstreet Bully. Ours dads actually got picked back-to-back in the second round of the ’84 Draft. They grew up together in Ontario and were best friends. Now Logie and I are best friends.
Brown
So now that we’re about to get drafted, The Players’ Tribune gave us the opportunity to sit down and interview one another. We’ve been doing so many interviews with teams and media over the last couple weeks that we thought it was a cool idea.
Chychrun
We’re literally sitting next to one another at a hotel in Toronto, by the way.
Brown
Alright, Chych. Why should my team draft you? Wait, no. You’ve been answering that question all month. Why should my team draft this Logan Brown kid?
Chychrun
Logan Brown? Terrible NHL video-game player. Stay away.
Brown
Hahaha. Don’t do this.
Chychrun
People need to know about our love of the game. That includes video-game hockey, I think.
Brown
Oh my gosh, it’s crazy. Remember when we were like 10 years old up at the cottage? That one epic game. 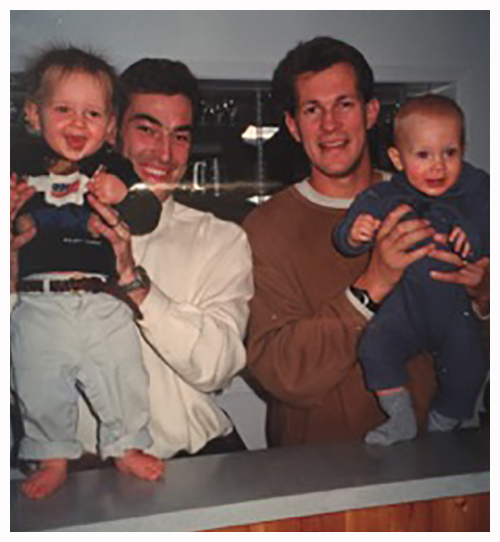 Chychrun
We used to play full 20-minute periods on NHL 07 on Xbox. The default is like five-minute periods. But we wanted the authentic experience. We’d play full three-hour games.
Brown
We would honestly stay up until like four in the morning.
Chychrun
Sometimes five. Because, like, the sun would be be coming up as we were shutting off the Xbox.
Brown
I still remember when I scored that backdoor goal with 10 seconds left in the game.
Chychrun
Hahahaha. O.K., the backdoor goal was so cheap in that game.
Brown
So I made it like 25–24. Chychy throws the Xbox controller as hard as he can against the bedroom door. It was just …
Chychrun
It was actually crazy. Those old Xbox controllers were really heavy.
Brown
It exploded.


Chychrun
We have to paint the picture for people, though. The room was like —
Brown
It was a tiny bedroom. We’d sit on the bedroom floor and battle it out for hours. There was no couch or anything. There was just this little TV, and we’d be sitting like one foot from the screen, just screaming and celebrating at 4 a.m. 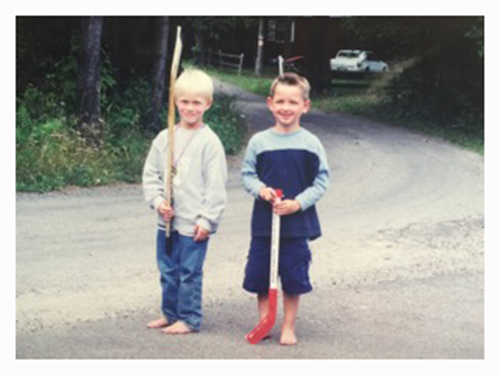 Chychrun
My poor sister. We shared a bunk bed at the cottage. So when the boys were playing NHL, she had to go sleep downstairs.
Brown
When teams asked about your competitiveness, you should’ve brought up the Xbox-controller thing.
Chychrun
The question you get a lot in these meetings is, “Do you love the game?” We really live it, breathe it. My first memories are being maybe four or five, when my dad was coaching in Florida. I’d go to his hockey practices in the early evenings, then we’d come home and sit in the hot tub for a while, then we would put our pj’s on and sit on the couch and watch hockey together until we fell asleep. We did that every single night.
Brown
I can’t recall one time in my entire life that I said that I didn’t want to skate. When I was 15, my dad was coaching in Indianapolis and I was doing online school. So I would wake up at 8:30 and walk to the rink with my dad in the morning. I’d hop on the ice for myself for an hour-and-a-half, get off, do my classes, and then go practice with this USHL team for an hour or two. Then I would get off the ice and go do another class. And then I would hop on again at night with my own team.
Chychrun
We were doing that radio interview the other day, and the host said something like, “You’ve been working your whole life, putting in so many hours for this moment.” Just hearing him say it, I got goosebumps. I thought about sitting on the couch in my pj’s with my dad, watching the NHL players, just dreaming. One day, you know? Now it’s literally like one day away.
Brown
So let’s start asking the hard-hitting questions. What can the fans expect if Chychy comes to their team? Other than an Xbox ultracompetitor.
Chychrun
Well, I think one thing a lot of people don’t know is that, growing up, I was a centerman. Sidney Crosby was my idol. He was the model for my game from every perspective. Then when I transitioned to defense a few years ago, I really fell in love with Victor Hedman’s game. And Drew Doughty’s, too. I mean, everyone I talk to says the toughest job in the NHL is coming in as an 18-year-old defenseman. That’s what Victor and Drew did, and it has been interesting to watch how their games have evolved.
Brown
How did they do it, though? Because just watching this year’s playoffs together, you see how hard guys are on the forecheck, how heavy they are. Defensemen have such a tough job now. 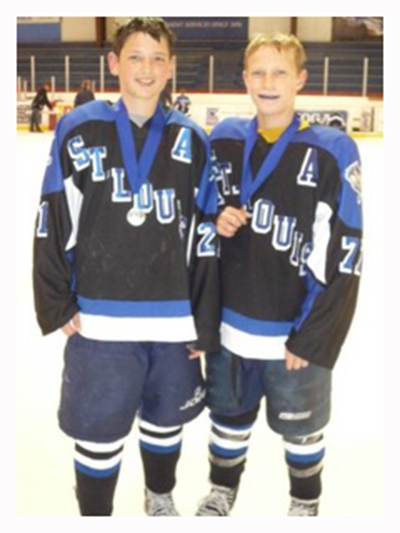 Chychrun
Personally, watching games on TV — I like to visualize. I like to picture myself in those situations. I like to just see how little time they have with the puck. How fast the forechecker really is coming. How fast you have to go back for pucks. Watching guys like Doughty and, especially, Erik Karlsson, you see how they protect themselves from punishment. They can shake the forechecker with those little shimmy moves and make a great, crisp pass out of the zone. Something my dad’s always wanted me to work at a lot is retrievals. It’s a lot about your footwork and misdirection with head-fakes and shimmies. If you can limit the number of times you’re gonna get rocked by the first forechecker, that can help in the long run with your career.

Logan Brown? Terrible NHL video-game player. Stay away.
Brown
And hitting the weights, eh?
Chychrun
Oh man, yeah. We’ve been working so hard with maintaining our bodies and then just putting weight on, like you said. In the OHL, I was consistently 195. Maybe a little under 195. Then I realized, “Alright, this is my NHL draft year. I kind of want to get heavier and kind of prepare for the next level.” So I got up to 215. That was a really big jump for me. It was like over 20 pounds. And I realized that was a lot of weight for me to be carrying around as a 17-year-old kid, so I went down a bit. Ideally, I want to be around 208, I think. We all can’t be natural 6′ 6″, 220-pound monsters like you, bud.
Brown
It’s funny though, because people obviously mention Joe Thornton a lot when they talk about my game, because of my size and my position. He was always one of my favorite players growing up, but I also loved Patrick Kane and Pavel Datsyuk — two smaller skill guys. I modeled my game after their stickhandling just as much as I tried to emulate Joe’s passing. Just because I’m 6′ 6″, why can’t I play a skill game?
Chychrun
You got a good two-and-a-half inches on Thornton. Listen, to be honest, I’ve never seen a guy as big as Logie be able to stickhandle in a phone booth like he does. He put up a ton of points this year in a great league in the OHL. Personally, I wouldn’t pass up on drafting that combination of size and skill. He’s a terrible, cheating video-game player, but I think teams will be able to look past that. 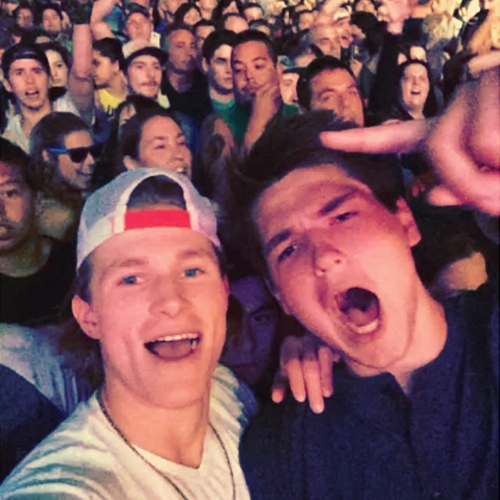 Brown
25-24. Scoreboard.
Chychrun
When did it hit you that this is real?
Brown
It’s funny, we were watching NHL All Access on Showtime the other night. You know, the show is following the Cup finals teams around. The last episode, the cameras go in the locker room with the Penguins as they’re celebrating with the Stanley Cup. You see their families there. The players are hugging, they’re crying. I had chills the whole episode. I have chills thinking about it right now. I don’t think the average hockey-watcher understands what those guys go through for that moment.
Chychrun
Especially in the playoffs. I mean, even in the OHL playoffs, you go into the locker room between periods and guys will be sitting there with like eight ice packs strapped to their body. It was hilarious — we were watching Game 7 of the NBA Finals, and LeBron was walking back to the locker room with the trophy all by himself. Obviously he carried his team and his city, but that would just never happen in hockey. It’s about all 22 guys — actually, it’s also about the healthy scratches, the GM, the coach, the equipment manager, the backup goalie. That’s what you saw in that Penguins locker room.
Brown
That moment that the Penguins had in that locker room is why everyone plays the game. When we were watching that, it really hit me that we were going to finally take the first step toward that goal. Obviously, it’s still such a long journey, but we’ve been working toward that first step for — what? Basically 15 out of 18 years of our lives?
Chychrun
Are you gonna cry tonight? Don’t cry, man. Your dad will never stop chirping you.
Brown
Everyone: Before you click off this article. Please Google “Jeff Brown Quebec Nordiques haircut.” You won’t regret it.
Logan Brown
Contributor
Jakob Chychrun
Contributor
Posted by Big Bear Tournaments at 12:30 AM
Email ThisBlogThis!Share to TwitterShare to FacebookShare to Pinterest
Labels: hockey