The Power of Practice

There’s a good chance that, as a child, your parents, teachers, and others in your life repeated the saying, “Practice makes perfect,” to you. And, in all honesty, this is a pretty good thing for them to teach you! This saying instills in children the idea that, if they work hard enough and don’t give up, they can achieve anything and achieve it perfectly. 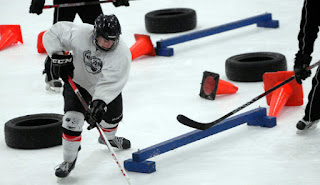 And, while this saying might have been popular when you were a kid, it seems that we don’t say it enough today, and furthermore, that we don’t really instill the value behind it firmly enough. For proof of this, just consider these common complaints from youth hockey coaches we talked with:

·         Kids only come to practices because, if they don’t, they won’t be allowed to play in the game. They’re not there for the right reasons!

·         Kids don’t think they have to come to practices because they, as players, are too important or invaluable to the team.

·         Kids complain about being tired during practices or about practices being “too hard.”

·         Kids are forced to come to practices by their parents; they don’t really want to be there.
These complaints show that kids don’t really value practice the way they should. They don’t see it as a way to better themselves and to achieve their goals. Instead, they see it as a cumbersome chore that they have to complete.

While, unfortunately, it is impossible to change every kid, you can start by instilling in your young player or players the value of practice- that it’s a stepping stone to greatness. Coaches can enforce this standard by only playing the kids who show up to practice and commit 100% each time.


When everyone works together to lead by example and teach kids the “power of practice,” maybe they’ll finally start to get it, the way we did when we were kids!