There is no doubt that youth hockey tryouts are stressful for everyone involved. Picking the top forwards and top defense players is usually pretty fast, easy, and obvious. But, selecting those last few bubble players can be challenging and harrowing. And, once the tough decisions have been made, directors and coaches are often left to deal with angry, sometimes even violent parents who are mad that their children didn’t make the cut. 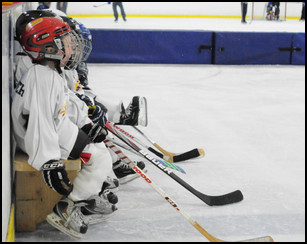 For youth hockey professionals who are tired of harassment and of getting accused of being unfair, there is a simple solution, which is to select teams by committee. Through this process, players are selected by a wide range of coaches and other “hockey experts” throughout the organization.
Different rules and systems can be set in place regarding how these officials should pick the team members. One common way is to give the “judges” a list of bubble players and rank each potential player. The chosen ranks can then be averaged out to choose the remaining players, sometimes while still allowing the actual coach one or two picks of his or her own.

The above process is just one way that committee tryouts can be held; you can do whatever works for you. However, by having a variety of different people involved in hockey evaluating the tryouts, you can ease hurt feelings and fight off accusations of “unfair politics.” Plus, you can clearly explain to angry parents how players were chosen.

Does this mean you’ll get rid of all angry moms and dads? Probably not, but committee selection can get rid of quite a few of them or at least give them less to grumble about. The bottom line is that if you’re tired of upset parents come tryout time, this strategy is definitely worth a try.
Posted by Big Bear Tournaments at 12:30 AM
Email ThisBlogThis!Share to TwitterShare to FacebookShare to Pinterest
Labels: selection by committee, youth hockey tryouts