Hockey Officiating Myths That Need to Go Away 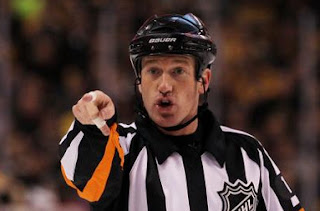 There is a common consensus among many hockey players and fans that “some rules are meant to be broken.” In other words, they believe that officiators should overlook certain rules and only enforce the ones that “really count.”

This is complete ridiculousness, however. An officiator’s job is to enforce the rules- all of them. While officiators do sometimes have to take things like intent and safety into consideration and make some tough judgment calls, they should always be enforcing all rules all the time. That’s the only way the game can be played fairly.

Some people think that officiators shouldn’t make a big deal about face-off locations. However, location is important, and officiators do have to choose their location carefully.

Need proof of this fact? Just consider that USA Hockey recently went with a nine spot face-off location. Therefore, officiators actually have to be very careful to take note of where play stopped so that they can make a rightful location decision.

Officiators Can Do Anything they Want

Finally, it is often believed that officiators can do anything and get away with anything, a belief that leads to a lot of animosity toward these professionals.

However, rest assured that these pros can and will be called on bad behavior or unfair officiating. Official groups and affiliations which sponsor, sanction, or hire officiators are usually the correct avenue for “outing” bad officiators.

In truth, though, most of these people try to be good at what they do. And, it’s definitely not an easy job. It’s even thankless at times, so try and remember to show a little love to the next officiator you encounter.

Posted by Big Bear Tournaments at 12:30 AM
Email ThisBlogThis!Share to TwitterShare to FacebookShare to Pinterest
Labels: hockey officiator, hockey ref