Everyone likes to win. That’s just a fact of life. However, there is such a thing as being too focused on winning, and unfortunately, a lot of today’s youth hockey coaches fall into that category. While many parents support and even look for this “play to win” attitude in coaches, it can actually do more harm than good to young players by causing their confidence to take a major hit after a loss. 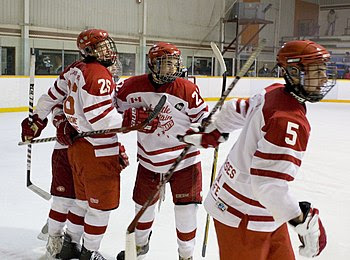 One of the big problems with a “winning focus” is that it often leaves out kids who aren’t as skilled as other players on the team. A coach who is focused only on a win is not going to put in less skilled players. Getting no playing time makes young players feel like they lack value and, instead of propelling them to succeed, it often causes them to give up on the sport and on themselves.

Another big problem is that win-driven coaches often forget to focus on fundamental skills, teamwork, and the general life skills that should be an added bonus of playing sports. They care only about the win and forget about all the lessons that should be learned along the way.

You also have to consider a coach’s reaction after a loss. If a coach is determined to always win, what will he do when a loss inevitably occurs? Some coaches show their anger and disappointment outright, which can be devastating to young players. Others do their best to hide their true feelings, but kids are perceptive and pick up on them easily, leading to those same negative feelings.

If you feel that your child’s coach has lost sight of the true focus of the game- building skills for life and having fun- it may be time to have a talk with him. Do it privately and quietly at first, and if nothing changes, then you may want to bring in some other parents who share your feelings. If your coach still doesn’t heed your advice, it may be time to look into another team for your young player.

Do keep in mind, however, that the fault doesn’t always fall on the coach. Parents are sometimes just as guilty, if not more so, of pressuring their young players and making the game all about the end result. If you’re guilty as charged, don’t beat yourself up. Just work on changing your behavior. Support and praise your child after a win or a loss and focus on the other positive things, besides winning, that come from playing this great game.
Posted by Big Bear Tournaments at 12:49 AM
Email ThisBlogThis!Share to TwitterShare to FacebookShare to Pinterest
Labels: winning, youth hockey coaches