I Ate Pucks for a Living, and I was Undrafted

It is a common misconception that a player must be drafted to play in the NHL. But there are many paths you can take to reach your dream. I’m just a hair under 5′ 9″ and never weighed more than 185 pounds, small for a defensive defenseman. I never played juniors, but I spent 15 years in pro hockey, 13 of them (633 regular-season games) in the NHL. And … I was undrafted.
Growing up in Brampton, Ont., I spent my Saturday nights playing with the Bramalea Blues Tier II Junior A team. When we were on the ice, there would always be talk up in the stands about where players had been drafted. It was the ultimate goal of every kid on the team.
My dad and I went to two NHL drafts together, to St. Louis in 1996 and to Pittsburgh in ’97, when I was 18. Back then it was nine rounds, and the last one we went to, we ended up sitting through every single one of them. I heard a lot of names called — a few belonged to good friends — but mine wasn’t one of them.

As we walked slowly out of that last draft, I naturally felt some disappointment after the last name was called . I remember my dad telling me, “You just find another way.” His words helped me get some closure. They also convinced me to resolve myself to make my dream of playing in the NHL a reality. Somehow. Some way.

I quickly set about taking a positive approach to my problem. Not getting drafted was a tiny bump in the road that I was going to get over. I would have loved to have been drafted, but I’m glad now that it didn’t work out. On my journey, the road was never smooth. To succeed I had to look past the bumps and stay focused on my goal.


I would have loved to have been drafted, but I’m glad now that it didn’t work out.

In my final year of high school, universities started to approach my teammates and me, offering the chance to earn a great education while playing for a top-tier hockey program. A recruiter from Michigan State was interested in one of my teammates, but I caught his eye during a game and he offered me a full scholarship. A few other schools also expressed interest in me, but I ended up signing with the Spartans.

At the same time that Michigan State was recruiting me, the Guelph Storm selected me in the OHL draft. The choice between playing in college and playing in juniors is one that many young prospects face. It wasn’t an easy decision. Playing in the NHL was my dream. But I chose to go to college first. I was really excited about the Spartans’ program — and even more excited about the opportunity for a free education.

I enjoyed a great career at Michigan State. In my junior and senior years I was named the best defenseman in the CCHA. I Ieft East Lansing older, stronger and more experienced — and a better all-around hockey player. 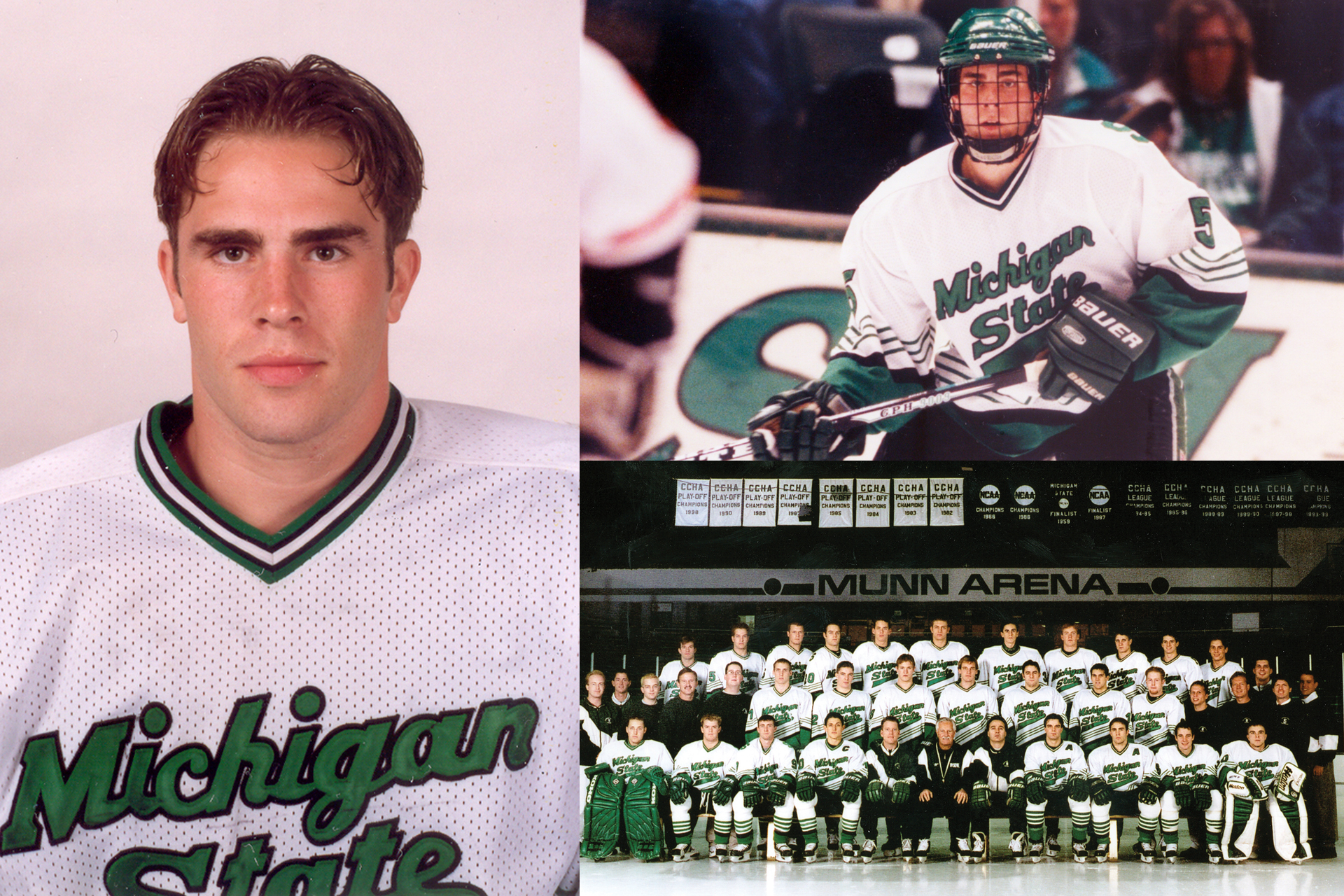 My first opportunity to play professionally came from the Atlanta Thrashers. Don Waddell, the team’s GM, was a fan of college hockey players and signed me right out of school. He sent all of us rookies straight to the minors before the season began and told us to spend the year learning how to be professionals. I was healthy scratched the first 10 games with the Orlando Solar Bears, the Thrashers’ International Hockey League farm team. Being a healthy scratch is never a good thing, but this wasn’t the first time that I had been passed over. I wasn’t worried.

Eventually I got my shot and I made sure I stayed there. I outworked everyone and I ended up becoming an important part of the team. We went on to win the 2001 Turner Cup before the IHL, and the Solar Bears organization, folded.

How did I leave my mark? Well, most guys look at practice as just practice. I looked at practice as an opportunity to improve my game. I was never given anything, I had to earn it. In professional hockey you are constantly under a microscope. There are simply more players than there are roster spots, so every move you make on the ice is evaluated. That can be viewed as either pressure or opportunity. In practice, there were always guys who skated hard when the coach was watching, but who dogged it when he wasn’t.


How did I prove myself? On the fringes. Most fans watch the puck during a game. But have you ever watched the players away from the puck?

How you perform when everyone is looking versus how you play when no one is watching speaks volumes about what kind of person and player you are. You have to know who you are playing the game for.

A lot of people go through their entire careers without really knowing what type of player they are, but I figured out who I was early on. I was a guy who was going to block shots, make the first pass out of the zone and be a goalie’s best friend. I was more excited about blocking shots than scoring goals. And I always cared more about the final score than the box score.

After that first season ended in Orlando, Jim Hughes, one of the Solar Bears’ assistant coaches, sat me down and said, “Mike, when you first got sent down, I remember thinking, What are we going to do with a 5′ 8″ defensive defenseman? I honestly had no idea.  We were going to send you down to the ECHL, but after I watched you play in your first game, I knew you weren’t coming out of the lineup.”

The following year, I was playing with Atlanta’s new affiliate in the AHL, the Chicago Wolves, and we ended up winning the Calder Cup. I was up and down between Atlanta and Chicago a lot the next three years.  In 2004, I signed a two-year free-agent contract with the L.A. Kings, with a two-way option in the first year and a one-way in the second. A two-way deal gets you NHL money when you are up and AHL money when you are down.  A one-way guarantees you NHL money no matter where you are.

My first year with the Kings was the 2004–05 NHL lockout, which wiped out the entire season. I played the year out in the AHL with the Manchester (N.H.) Monarchs, which I saw as an opportunity to prove to L.A. that I was worthy of getting the one-way option. I had a great season in Manchester, with terrific experiences, and we made it to the playoffs. It was my first step toward playing full-time in the NHL.

How did I prove myself? On the fringes. Most fans watch the puck during a game. But have you ever watched the players away from the puck? People don’t realize that the play away from the puck is sometimes more important than what is going on with the puck.

That was my game!

Kids always think that when scouts are in the stands they have to score goals, but scouts know that games aren’t won with 20 scorers — or 20 playmakers, or 20 shot blockers. You have to have balance. An NHL roster is like a puzzle.  Every player is a piece who has to fit with 22 other pieces. The most successful team is the one that puts the puzzle together in the correct way.

Many people saw my size as a negative and said that I would never make it. That fueled my success because I always felt like I had something to prove. I felt that whatever I did would never be good enough for the doubters, which pushed me to work that much harder. I never took satisfaction from having played a good game. When someone told me good game, I would never say thank you. I would always say that I could have played better. I was always striving for perfection, even though I knew that I would never attain it.

And in an effort to become the very best I could, I put everything on the line — including my teeth.

Once when I was playing with the Wolves, I was fighting for position in front of the net and got cross-checked from behind. A puck from a slap shot hit me square in the bottom half of my jaw. It blew some of my teeth clean out. I even remember spitting a tooth into my glove. Skating off the ice I was able to stick my tongue out of the hole that had opened below my lower lip. I needed stitches and a bridge, where dentists were able to reinsert one of the teeth that had been knocked out.

Every successful athlete knows the saying about preparation meeting opportunity. That was my career in a nutshell.

A couple years later, when I was playing in L.A., I called the Wolves to notify them that I needed more dental work as a result of the injury. But the next day, while playing a road game against the Blackhawks, I took another puck to the exact same spot on my jaw, which blew four of my bottom teeth out. After coming off the ice and getting looked at by a dentist, I was told to remove my equipment. I immediately said that I was going back out. At first the team doctors said no, but after some arguing, they finally agreed to allow me to play — but only after X-raying my jaw to make sure it was not broken. The X-rays came back clear and I went back to the bench to finish the game. The look from my teammates was priceless.

That Monday, I made another call to the Wolves that was both difficult and funny. Difficult because I couldn’t really speak, and funny because I told them, “Don’t worry about what I told you last Friday. I just blew out all my teeth again this weekend and L.A. is paying for it now!”
Every successful athlete knows the saying about preparation meeting opportunity. That was my career in a nutshell. I always worked at my game, improving myself and figuring out new ways to stop my opponents. You have to be on top of your game at all times — feeling comfortable is not an option.

There is great freedom in going undrafted. As a free agent, you can sign with any team, choosing the offer that’s best for you. Kids are brainwashed into thinking that the only way of making it to the NHL is to get drafted. But getting drafted means that you are owned by an NHL team, it does not mean that you will play in the NHL or make millions. That only happens for a select few.
At some point you are going to need your education. Preparation in life is just as important as it is in sports. My Michigan State education came in handy when I started my Defense First Hockey School back in 2004. At Defense First, we teach how hockey relates to real life. If you enjoy the journey you will never be disappointed. You started playing because you enjoyed the game, so continue to have fun!

Knowing who I was in the game, doing anything it took to get things done and being humble while doing it gave me a 13-year career in the NHL.