It is not at all unusual for kids to suddenly start showing a lack of interest in hockey or even to declare that they don’t want to play it anymore. After all, they are kids, which means they are growing and changing regularly. With that said, though,it is always smart, if your child says he wants to quit hockey to at least ask why. 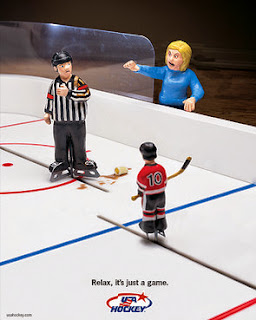 There are many good reasons why a child might want to quit hockey, such as wanting to try something new or just plain not liking the sport. However, there are also bad reasons, and one of the common bad reasons might surprise you. It is, believe it or not, the problematic parents of other players!

Kids, more frequently than you might think, often cite aggressive parents- ones who push their kids to aggressively check other players- as a reason for quitting hockey. Sometimes, they also cite parents who yell at the team during and/or after a game and make everyone feel bad. It’s also common for them to mention parents who play favorites, whether they make them feel uncomfortable with extra, special attention or by treating them poorly.

If you ever find yourself in a situation where your kid wants to quit hockey because of poor parents, ask him to get specific and name names because you may just have to have a talk with the parents in question or at least the team coach. And, if the vast majority of team parents are to blame, then it may even be time to quit that team and find another one- one where the parents are a bit more sane and supportive.

The bottom line is that there are many valid reasons to take a break from youth hockey, but badly behaved adults are certainly not one of them, so if your little one complains about badly behaved parents, it’s time to take action of some sort!

Posted by Big Bear Tournaments at 12:30 AM
Email ThisBlogThis!Share to TwitterShare to FacebookShare to Pinterest
Labels: Parenting, problematic parents