Technology has really taken over every possible aspect of people’s lives. People text throughout the day and glance at their phones several times an hour. In fact, the recent technology obsession has caused many youth hockey coaches to ban technology usage during games and practices. With that said, though, technology does have a place in the sport. 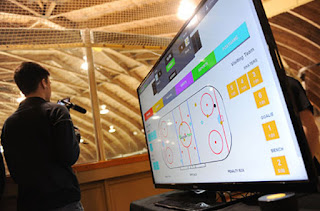 Take, for example, the app known as Teamsnap. This app allows parents and young players alike to handle scheduling, get in contact with those related to the team, and to receive game updates. Obviously, this app is a wonderful example of what can happen when sports and technology meet. Aside from apps like these, however, many coaches feel that technology is doing more harm than good.

Some coaches say that relationships can’t truly be built between teammates if all their downtime together is spent staring at their phones. Thus, they ban technology usage altogether at hockey-related functions.

Others take a more reasonable approach. They allow players to use their phones at set points before or after games and expect phones to be turned off at all other points. They also enact consequences for when the rules are not followed.

This kind of approach, as described above, seems to be the best and most effective way of allowing technology and hockey to mix…without allowing technology to overpower the sport. So, if you are having trouble taking your team’s focus off of technology and getting it on the game and on each other, these are some good strategies to try.
Posted by Big Bear Tournaments at 12:30 AM
Email ThisBlogThis!Share to TwitterShare to FacebookShare to Pinterest
Labels: hockey and technology