When you ask hockey players about their goals, more often than not, they will tell you that they want to skate faster. However, few people know how to actually achieve this goal, and that’s because there isn’t one simple answer for how to do it. However, there are a lot of tips and techniques that can help players to improve skating speed. 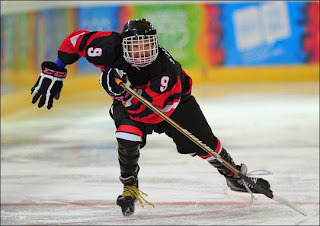 Practice Makes Perfect
It might sound simplistic, but the most surefire way to improve your skating speed is to play the game more. And, yes, the actual game.
You can practice stickhandling individually. You can practice skating individually. But the only way to really make it all come together and improve your speed without hurting your game play is to spend more time playing.

Match Your Arm Swing to Your Skating
You might not think that something as simple as whether or not you swing your arms would matter, but it does, at least when it comes to hockey speed.
Whether you’re skating forward or backward and no matter how you’re holding the stick, swinging your arms properly and in line with your skating is going to propel you forward and increase your speed.

Incorporate Strength Training into Your Routine
If strength training isn’t part of your routine, it needs to be. In fact, it needs to play a major role in your training regimen.
The stronger you are, the more powerfully you’ll be able to shave that ice with your skates. And, the more powerfully you do that, the faster you’ll move, plain and simple.
Thus, the easiest way to skate faster is to get stronger. Weightlifting and other conditioning exercises done regularly are a great way to start.

Go for A Sprint
Running typically isn’t advised for hockey players. However, if it’s speed you’re after, there’s no easier way to gain it than by learning how to be a good runner.
You don’t have to run for long distances-  nor should you- but going for a steady sprint a few times a week can help you to improve both speed and stamina on and off the ice.
Everyone wants to be a faster skater, but by giving these tips a try, you could actually achieve this goal instead of just dreaming about it.

Posted by Big Bear Tournaments at 12:30 AM
Email ThisBlogThis!Share to TwitterShare to FacebookShare to Pinterest
Labels: skate faster