The Reality of Being a Goalie Parent

Having a child who plays the goalie position isn’t easy. For starters, you have to watch your child perform in a precarious position- with pucks literally flying at that precious face you created! Then, there’s the fact that everyone puts a lot of pressure on the goalie, and you may have to bite your tongue as other parents yell at your child from the sidelines or make snide comments. Then, of course, you have to deal with how your child feels when he fails, which is often like he let the whole team down. 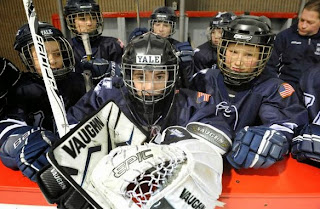 As if all of that wasn’t enough, there’s the extra cost involved in buying goalie equipment. While every hockey player needs special equipment in order to stay safe on the ice, goalies often need more of these items and more specialized items too, like very heavy pads for protection. These pieces of equipment often don’t come cheap. So, on top of the financial sacrifices all hockey parents make, you’ll have an additional financial burden as well.

All in all, being a goalie parent is not easy and has its own unique challenges compared to having a child who plays another position. However, it’s not all bad. Goalie parents often get a rush of pride when their young goalie makes a super save or even just when he stands in that net, in a position of pride on the team.

Posted by Big Bear Tournaments at 12:30 AM
Email ThisBlogThis!Share to TwitterShare to FacebookShare to Pinterest
Labels: hockey goalie parent